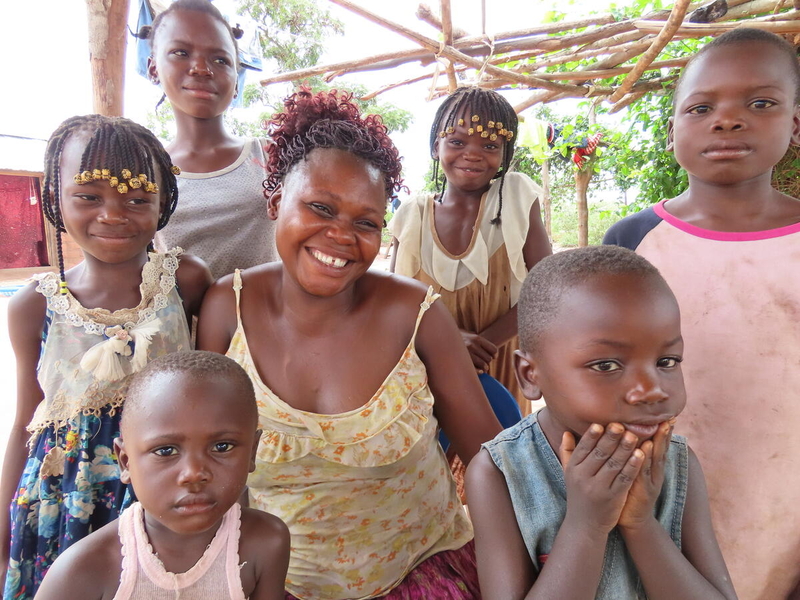 On Friday, August 5, representatives of the Angolan government and members of the World Food Programme (WFP) in the country participated in the first session of the “Virtual Study Visit: Brazil”, promoted by the WFP Centre of Excellence against Hunger in Brazil, in partnership with the Brazilian Cooperation Agency (ABC) of the Ministry of Foreign Affairs (MRE) and the National Fund for Education Development (FNDE).

The methodology of the visit includes, in addition to the  opening and closing virtual workshops, a series of videos and written materials that simulate an immersion in the Brazilian National School Feeding Programme (PNAE). At the opening session, Daniel Balaban, Director of the WFP Centre of Excellence, described the recent changes that led the Centre to develop, along with its partners, a methodology of remote support to countries, which includes the Virtual Visit. “Based on past experiences – and even before the pandemic – we created this project, together with ABC and FNDE, to support South-South dialogue and stimulate the creation and implementation of programmes, especially those that focus on school feeding,” said Daniel Balaban.

“We understand that this modality has the ability to meet countries’ demands for technical assistance in a quick, affordable and effective way, also allowing larger delegations to participate in the activities. We believe that virtual exchanges bring together technicians and policy makers in school feeding from Brazil and other countries in an environment of knowledge exchange”, he added.

Also at the opening session, Aldo Sambo, consultant at the Angolan Ministry of Education, presented some characteristics of the country’s school feeding programme and highlighted the country’s current priorities. He said that, despite economic and financial difficulties, which were aggravated by the pandemic, the Angolan executive has been working on the universalization of school feeding in public primary schools within the national development plan for 2018-2022 and aligned with the Sustainable Development Goals. “This visit is an opportunity to exchange experiences and allows, efficiently and intelligently, that the two governments continue to invest in social protection and student development and promote entrepreneurship and local income generation,” he said.

Edenilza Carvalho, Monitoring Coordinator of the National School Feeding Programme (PNAE), also outlined a brief overview of the Brazilian school feeding programme, noting that it is based on the right to adequate food and the principle of universal access, encouraging family agriculture to ensure food quality and also stimulating the local economy. PNAE today serves more than 40 million students in 5,570 municipalities.

“The PNAE has evolved from an emergency model to what it is today, integrated into national policies. Social benefits increased as the programme evolved. It is up to us to sensitize the actors involved and empower the professionals so that we can use this public policy with all the potential for transformation that it has”, said Edenilza Carvalho.

José Ferrão, Senior Programme Officer for WFP in Angola, also participated in the opening session and presented an overview of WFP’s support for the country over the years. “I would like to reaffirm that WFP continues to provide all technical support to the Government of Angola to ensure the implementation of sustainable school feeding,” he said. Representing ABC was ambassador Luiza Lopes da Silva, Deputy Director, who gave an overview of Brazilian cooperation efforts in the area of school feeding and of  the relationship between Brazil, the WFP Centre of Excellence and Angola. 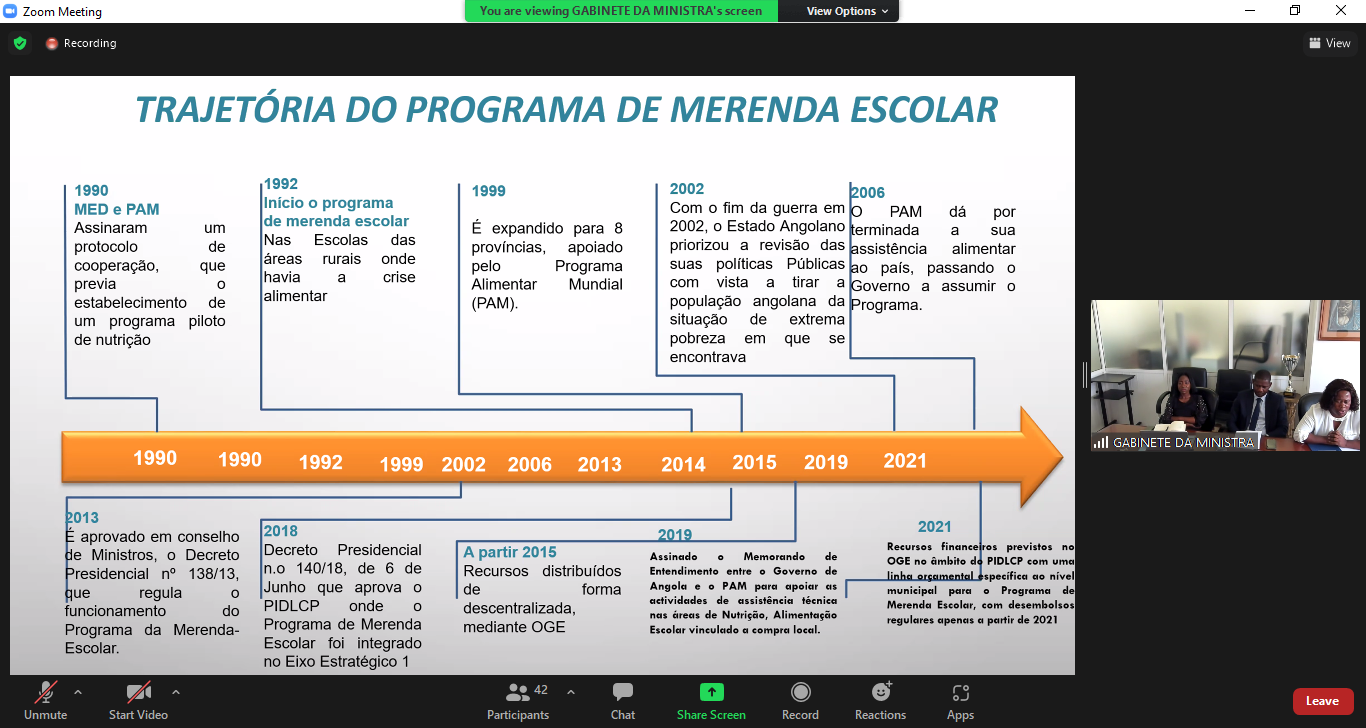 The country launched its school feeding programme 1990, already in partnership with WFP. In 1992, the country started school feeding in rural areas where there was a food crisis. In 2006, WFP ceased to provide food assistance in the country as the government took over the programme. “In 2021 the Ministry of Finance creates a specific budget line for school feeding in the general budget of the state. It is not yet the desired value, but it was a positive step forward,” said Isel Isabel Epalanga, Head of the School Health Department of the National Directorate of Preschool and Primary Education in Angola.

In 2021, the country participated in the SABER (Systems Approach for Better Education Results) exercise, promoted by WFP. As a result, some priorities were identified for the strengthening of school feeding in the country, including the formulation of a proposal for a National Food and School Health Policy and the creation of a national unit for the management of the School Feeding and Health Programme and the definition of its attributions.

In addition, the country intends to work on defining procedures for budgeting, monitoring, evaluation and accountability. As in the Brazilian case, community participation is part of the priorities and Angola also hopes to build a strategy to define the role and responsibility of the community in the planning and execution processes of the school feeding and health programme.

“One of the main challenges after the initial phase, which is the completion of the school health and food policy, comes the challenge of the coordination system. We think we are on track and this meeting creates a multisectoral engagement,” said Domingos Cunha, Head of Programme and Representative for the Education Sector at WFP in Angola. 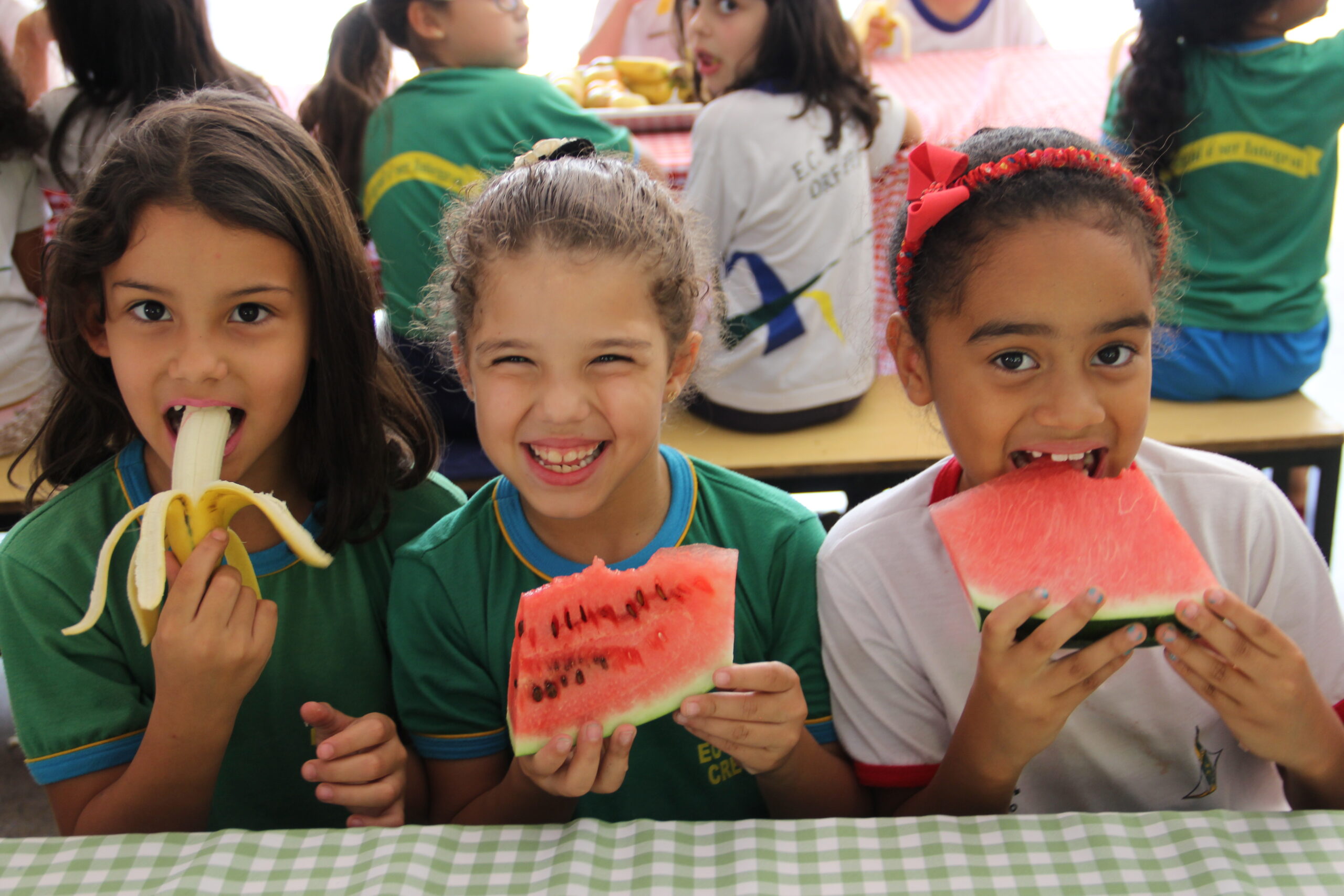 Isabella Araújo Figueiredo, Substitute Coordinator of Food and Nutrition Security at PNAE, presented the programme, which faces enormous challenges in a country the size of Brazil. “The PNAE is central to the growth, learning, biopsychosocial development, school performance and the creation of healthy eating practices,” she said. She also recalled important characteristics of PNAE, such as the requirement of at least 30% of family farming purchases and the creation of bespoke menus according to regional and ethnic characteristics.

In addition, the programme defines percentages of budget execution to prioritize the purchase of fresh food and prohibits the purchase of certain low nutritional value foods or ultra-processed foods. Isabella Figueiredo also detailed how the PNAE implemented the distribution of food baskets to students during the schools’ closures and recalled that coordination between the various ministries involved is also crucial.

After the first workshop, the Angolan delegation will have access to Virtual Study Visit Videos, as well as support materials with detailed information about the PNAE. Participants will have one week to watch all videos as many times as they wish and bring their questions to the Closing Workshop, which will take place on August 11. The session will be dedicated to the exchange of information on the PNAE and how they wish to improve Angola’s food and nutrition programmes and policies.