The “Observatório da Conjuntura: Food Security and Inequalities” webinar was promoted by Sesc and FGV Social 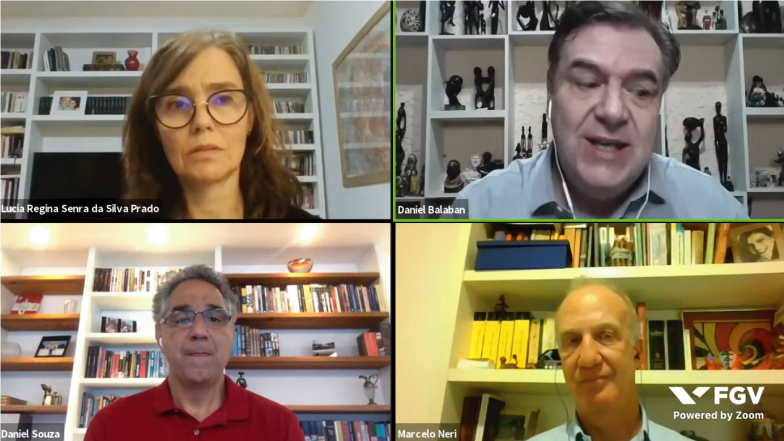 The director of the WFP Centre of Excellence against Hunger, Daniel Balaban, moderated the “Observatório da Conjuntura: Food Security and Inequalities” webinar, organized by FGV In Company in partnership with Sesc, on July 1st. Marcelo Neri – Director of FGV Social, Daniel Souza – President of Ação da Cidadania and Lucia Prado – Director of Social Programmes at Sesc participated in the event.

In his opening remarks, Daniel Balaban warned that currently 821 million people are food-insecure in the world, the vast majority of which are women and children. The COVID-19 pandemic has helped worsen this situation and increase inequalities. He also recalled the greatest legacy of Josué de Castro, author of The Geography of Hunger and former Director of the United Nations Food and Agriculture Organization (FAO), which was “to bring hunger into the national debate and to show that hunger can be combated with public policies and social programmes”.

Marcelo Neri, from FGV, opened the round of presentations with a historical overview of the fight against hunger in Brazil. He highlighted the work of Herbert de Souza, also known as Betinho, in social mobilization campaigns in the 1990s, a time of high poverty rates in the country. He also spoke about the disparity between the numbers of global food production and hunger. “Brazil is now known as ‘the world’s farm’, a major food producer, but still with people going hungry”.

Daniel Souza, son of Betinho and president of Ação da Cidadania, was the next to present. He reviewed the 27-year history of the organization and presented emblematic food donation campaigns throughout those years, such as Natal Sem Fome (Christmas Without Hunger), which resumed in 2017. Because of the pandemic, this year alone, Ação da Cidadania collected more than 5,000 tons of food. “We know that we will have to continue with this campaign through to Christmas this year because of the pandemic, and we will probably continue in 2021”, said Daniel Souza.

Finally, Lucia Prado, director of Social Programmes at Sesc, described the organization’s social initiatives, especially the Mesa Brasil programme, which distributes food to the vulnerable population through partnerships with the private sector. The programme was launched at Sesc São Paulo in 1994 and it holds 91 units for receiving and distributing food, with 3,000 donor companies. “The distribution is carried out by six thousand registered institutions, which means that Mesa Brasil manages to provide additional food to 1.4 million people daily”, explained Lucia Prado.