Employee of the Month: Mariana Rocha 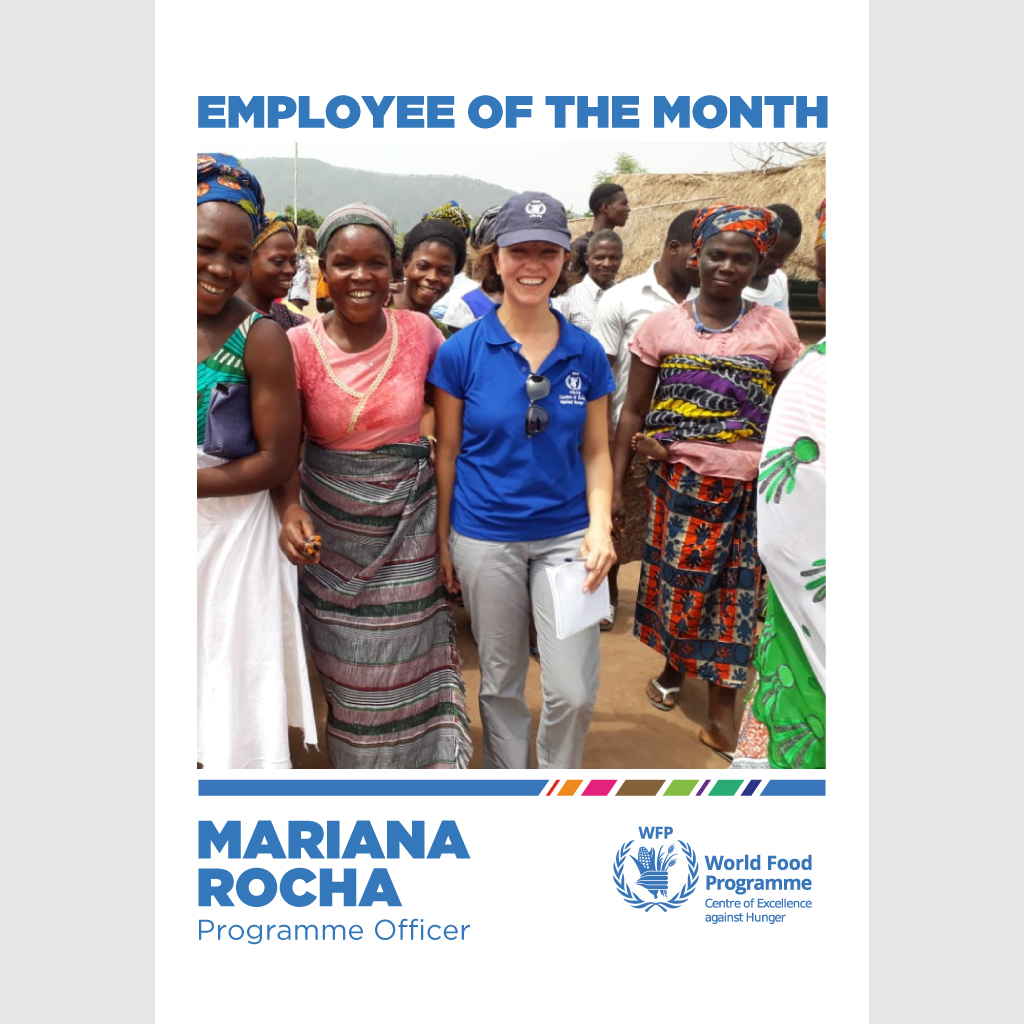 The flexibility of Mariana

She speaks Portuguese, English, French, Italian and Spanish and has an impressive ability to combine different interests and opinions to form consensus. Mariana Rocha is a programme officer at the WFP Centre of Excellence against Hunger and, during her spare time, practices yoga. No one better than her to be our employee of the month in June, when we celebrate International Yoga Day.

The practice of yoga is recognized by the United Nations as a means to improve health and has as one of its effects the development of flexibility of practitioners. In Mariana’s case, this flexibility is perceived objectively in her body, but also metaphorically in her way of performing her work.

“My first job was at age 14, as cashier in my father’s gas station. I ended up helping him in the management of the business and I was in charge of processes like receiving merchandise, doing inventory. Doing this kind of work has allowed me to develop greater awareness about financial management. It made me a more flexible professional, able to act both in the political sphere and in the administrative and financial planning of an organization,” says Mariana.

When she finished high school, Mariana left the city where she was born in the state of Santa Catarina and went to study law in the state capital, Florianópolis. Soon after graduation, she moved to Europe to pursue a master’s degree in human rights and democratization. The course was an initiative of the European Commission in partnership with several universities, and Mariana had the opportunity to study in Italy and the Netherlands. “This master’s course was work-oriented and had a practical dimension that fit well with my interest in working in ​​international cooperation.”

After completing her master’s degree, Mariana remained in Europe and, to gain professional experience, did internships in two human rights organizations and in the European Parliament, first in Germany and then in Belgium. In Brussels, she got her first formal job in an organization that supports civil society in countries with which the European Union relates so that EU policies take into account the human rights situation in those countries. Mariana worked with human rights defenders from several countries, mainly from Central Asia, some of them with serious cases of human rights violations. “My job was to do advocacy, but because the organization was small I ended up doing everything, including project management. Once again having flexibility was a very useful feature for me.”

When Mariana decided it was time to return to Brazil, she saw a job vacancy announcement at the WFP Centre of Excellence. “I was already following the Centre’s work and I thought it would be interesting to work with capacity building, technical assistance to the governments of more than 30 countries and food security. The perspective of working with a positive agenda, sharing successful experiences, was very appealing to me at the time and a welcome counterpoint to the intense challenges of working with human rights violations,” she says.

“I think, like many people, I had the dream of working at the United Nations. I have always wanted to contribute to solving global problems. I have lived in other countries since I was young and living in international environments, speaking other languages ​​and immersed in other cultures has always been a very rich experience for me. ”

Working with the WFP Centre of Excellence, Mariana’s experiences have expanded even further. “I have been able to see different places and realities and have access to people who can decide the course of a whole country. My work has given me the opportunity to positively influence those people who may decide to invest in actions that ensure more children have access to education and nutrition. It is a privilege to be able to contribute to this cause.”

The work at the WFP Centre of Excellence did not only expand her knowledge about other countries: “The WFP Centre is an opportunity to see how Brazilian experiences in the area of ​​fighting hunger are valuable. We don’t see this very often, especially because the news we receive from the media is usually negative, but outside Brazil the knowledge we develop here is highly valued.”