Within the scope of a partnership that exists between PUC-RJ and the WFP Center of Excellence against hunger in Brazil since 2021, the Centre of Excellence is supporting a group of students in the elaboration of a capstone project exploring the transversal gender approach in the promotion of food and nutritional security, with emphasis on school feeding programs, taking into account WFP’s new Gender Policy.

On October 6th, the Centre of Excellence promoted a workshop with the professional master’s degree students in Analysis and Management of International Policies, a post-graduation programme at the International Relations Institute from the Pontifical Catholic University of Rio de Janeiro (PUC-RJ). The programme included presentations by Elizabeth Burgessims, Senior Gender Adviser at the World Food Programme, and Renata Leite, from UN Women Brazil. In this session, the students had the opportunity to interact with the specialists, fostering the theme in academia, and complementing their ongoing research.

At the first section, Renata Leite, from UN Women, approached the importance of agriculture to the production of food, and the importance of including rural woman, considering their diversity as a subject of public policies, which has been implemented by all agencies within the UN system. “Bridging the gaps, closing the breaches, having a transversal principle to all programs and public policies, recognizing women beyond just, a member of the family composition,” said Renata Leite. 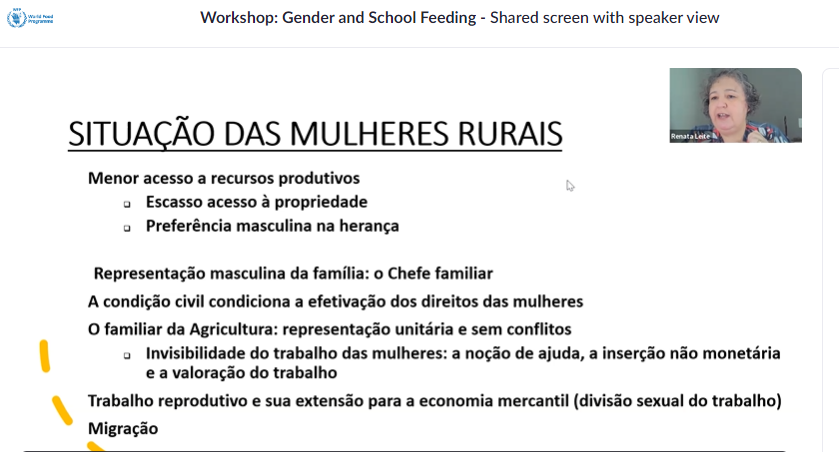 This was followed by a speech by Elizabeth Burgessims, from the WFP gender office, who presented a series of collected data about gender inequality and food insecurity. “Women and girls often eat less and last, and their nutritional needs may be sidelined, deepening hunger, malnutrition, and poverty,” she said. Women play a critical role in global food production and food systems and, as of 2021, there were 150 million more food insecure women than men in the world.

Considering this reality, Elizabeth Burgessims reinforced WFP’s commitment with the promotion of food and nutritional security among women and girls, introducing the new WFP’s Gender Policy, which will have a flexible and systematic approach in order to guarantee the analysis of gender in all contexts, countries and partnerships. “WFP aims to shift the narrative from one of vulnerability and victimization to one of support for women’s empowerment and resilience in times of crisis,” she said.