Employee of the Month: Sharon Freitas 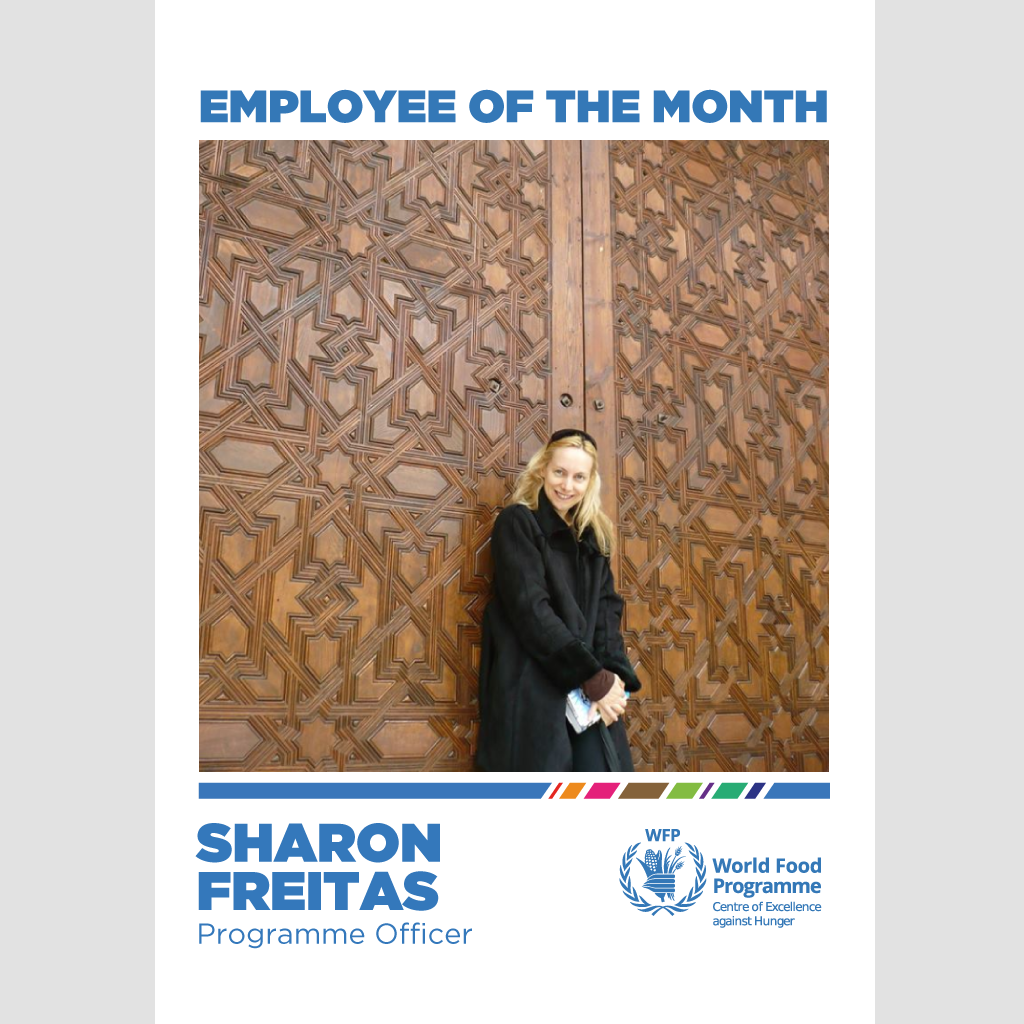 She was the first employee hired by the World Food Programme in Brazil, when the WFP Centre of Excellence against Hunger was created, and she knows our office in detail. She helped overcome all the challenges we faced over eight years and has participated in building the cooperation process with more than 30 countries working in partnership with the WFP Centre of Excellence. Sharon Freitas holds our institutional memory and is unanimously the most fun person on our team.

Sharon studied Communication with the hope of working on a television channel dedicated to travel shows. At the time when she chose this university course, she did not remember that, since she was four years old, what she really wanted was to work at the United Nations. “When I was a little girl, I watched a children’s movie where the characters were two little mice who worked at an underground UN office. When I finished watching the film I said to my mother: ‘when I grow up, I will be just like them and I will work at the UN'”.

Until having the chance to work in a real UN office, Sharon went around a bit. After graduating, she worked at an advertising agency, ran a company in the area of education, was hired to open and ended up becoming a business partner in an English school. In 2001, she decided to get back to school, and earned a master’s degree in international relations in Belgium. During the course, she met Gustavo and returned from Belgium with a diploma and a husband. She spent five years teaching at a private university in São Paulo, until she decided to change her life again.

The couple came to Brasilia to try approval in a civil service exam. As soon as she began to study, Sharon came to the conclusion that this was not the best path for her. “I decided I wanted a job, and soon I started working in the foreign affairs office of the Brazilian Central Bank’s presidential cabinet”. Her restless spirit made Sharon continue to seek new opportunities, this time at the UN. “I believed that this would be an international job that would allow me to really help people,” she said.

Sharon did an interview to work for another UN agency in Brazil and was selected for the job. When she went to tell her boss, the president of the Central Bank at the time, he asked her to stay. “I couldn’t say no, because he was counting on me”. After a few months, however, the president left office and Sharon felt comfortable to resign. “My last day at the Bank was on a Friday, and the following Monday I received a call telling me that the World Food Programme would open an office in Brazil and was looking for someone with my profile.”

In the eight years of working at the Centre, Sharon has done everything. Really everything: “I’ve cleaned the toilets, I’ve borrowed a broom from a neighbor to sweep the office, I’ve brought drinking water from home, I’ve even had to carry money hidden in my clothes to avoid being robbed, because we still didn’t have electronic payment and not even a safe”. In this period, the Centre staff grew larger and Sharon helped structure all areas of the office. She went through five different supervisors until she became programme officer, the position she currently holds.

Not for long, though. The WFP Centre of Excellence is undergoing a transition and Sharon will take on a new challenge next May: replacing Christiani Buani as head of the programme unit. Christiani, after almost eight years at the WFP Centre of Excellence in Brazil, will now help structure the new centre of excellence in Côte d’Ivoire (read Chris’ profile here). “What I hope in this new function is to extend our activities through remote support to countries. My expectation is that we will be able to reach more countries and continue to provide quality services,” said Sharon.

“The UN may be the organization with the largest entry in all countries of the world, especially WFP. We go where no one else goes. We bring hope to people, besides food. Our presence is often the difference between someone’s life and death,” Sharon said. “One of the most emotional moments of my work at the WFP Centre was when we received a delegation from Togo and, after a presentation about how school feeding and smallholder farming can work together for the development of a country, one of the delegation members said to me: ‘this is what will take my country out of extreme poverty’. After hearing this, I see daily that the work I do has a purpose.”